In The Darkest Hours


UW students are cramming. The Essen Haus regulars are holding up the bar (God bless ‘em). Some nice young folks are passing boots and enjoying each others’ company. We are four nights away from the longest night of the year.

While setting up the gear, the Trio (me, Rick, and Randy Kiel filling in for ailing Gary Hendrickson) catches each other up on how we knew our two recently passed friends and compadres—Steve Kasprzak and Bill Beckman. Death can put a serious damper on the joyousness of the season. We tune up and soldier on with our conjoined repertoire of mostly well-worn sixties hits, country, polkas, and Christmas tunes.

Then what to my wondering eyes should appear, but a dude who looks and sounds like the elusive Don Vallarta (aka Chico LaBamba). It is! WTF indeed! Back for a rare holiday visit to our fair state, and in company with brother Rick and his lovely wife Jody, Don needs only the faintest whiff of cajoling to join in and take us for a spin through Two More Bottles of Wine, Good Hearted Woman, Third Rate Romance, Route 66, etc. Musical merriment!

Wait, there’s more. My old pal from Capital City Distribution, Mike McCloskey, shows up with his friends and they collectively light up the dance floor with smoove moves. Not surprisingly, Mike has a joke to share, but amazingly, this one is GOOD! Our small but stalwart audience gives us more appreciation than we deserve. In case I forgot to make it clear upon last midnight, we love you for that. Give and receive thanks! The days will soon be getting longer. More light.

Coming up!
Dec. 18, The Birddog Blues Band at Smokey’s in Monroe, WI. Special guest, on the mighty B3, John Cammilleri.
Dec. 25, Peace on Earth, People!
Dec. 31, wringing in the New Year with The Cash Box Kings at the Crystal Corner.
Jan. 7, BWT3 at ye olde Essen Haus.
Posted by tmmcmusic at 9:43 AM No comments:


I went on FB this morning intending to post a quick notice for BWT3’s recurring Essen Haus gig. What I saw right away was a double dose of bad news. Two bass playing friends, gone—Steve Kasprzak, orchestral bassist and longtime musical mainstay of the Christy Larson Honky Tonk Trio, and Bill Beckman, master carpenter and longtime bass man for Shari Davis and others—both wonderful guys, both gone too soon.

I suspect that my reaction was similar to that of others, not just a fast fall into a pit of sadness, but frustration that I might have missed a chance to say or do something that could have helped them, or at least helped them understand how much I respected them and valued their friendship. BEFORE it was too late.

But the show must go on. Tonight’s gig is for Steve and Bill, my fellow laborers in the low end. Thanks for all you gave us. 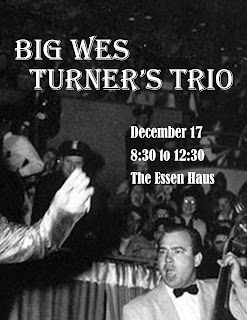 Posted by tmmcmusic at 9:57 AM No comments:


Tis this Saturday night! (Dec. 12) Wintersong presents an impressive array of Madison’s young musical talent (including Paul Otteson's Faux Fawn), and puts a fresh spin on seasonal entertainment, all for the sake of Second Harvest. The Barrymore Theater is close to sold out, so wait no longer!

Later that evening, the token AARP member on the Barrymore stage will be making a hasty exit to get two blocks down Atwood Avenue to The Harmony Bar & Grill for an evening of Chicago blues with The Cash Box Kings. Grooves will be got on!

Coming Up:
Dec. 17, Big Wes Turner’s Trio plays their last pre-Christmas Thursday at The Essen Haus. Come for the beer boots, kraut unt schnitzel, and rockin’ Holiday tunes.
Dec. 18, The Birddog Blues Band at Smokey’s Bar in Monroe, WI.
Dec. 25, Peace on Earth, People!
Dec. 31, wringing in the New Year with The Cash Box Kings at the Crystal Corner.
Posted by tmmcmusic at 11:40 AM No comments:


Tomorrow night Big Wes Turner’s Trio plays the first of two post-Thanksgiving and pre-Christmas Thursdays at The Essen Haus (Dec.3 and 17). That means as many Holiday tunes as we can squeeze out, or squeeze in (depends on your perspective).

Coming up:
Dec. 12, Faux Fawn participates in the Wintersong (fundraiser for Second Harvest) at the Barrymore. A worthy and wonderful event.
Dec. 17, the above-mentioned BWT3 Essen Haus holiday extravaganza.
Dec. 31, wringing in the NY with The Cash Box Kings at the Crystal Corner. 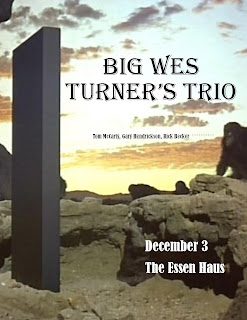 Posted by tmmcmusic at 8:02 AM No comments:


Print media needs labels. Like stereotypes, they save time and, importantly for print, space. Isthmus is no exception. Among the services Madison’s local weekly provides is a list of where and when to find live music. At editorial discretion, performers are chosen for noteworthiness and given top billing on the listing for a particular day, where they are often presented with a picture and a quick descriptive paragraph. The less noteworthy performers are listed in alphabetical order by club, and often with a label identifying their musical genre.

Labels can be useful, they may even be necessary, but what happens when a label is misapplied, or worse, is so inherently slippery that its utility as a label becomes dubious?

Once upon a time, The Midwesterners Trio found it expedient to accept the “Americana” descriptor. As previously pointed out here, Big Wes Turner’s Trio follows in Midwesterners’ footsteps, and Isthmus continues to slap the label on our listings. But lately we've been having a long think about what the heck “Americana” means. Grandpappy’s Britannica has no entries in between “American War of 1812” and “Americus,” but Webster’s Seventh New Collegiate offers that “Americana” refers to any materials or collections of materials concerning or characteristic of America, its civilization, or culture. Now, music may not be material (ask a physicist) but American music can certainly concern itself with or characterize Americanness. So, Aaron Copland, right?

Maybe not. As it turns out, there’s an outfit called the Americana Music Association (AMA) and they’ve come up with a definition that suggests Americana is “contemporary music that incorporates elements of various American roots music styles, including country, roots-rock, folk, bluegrass, R&B and blues, resulting in a distinctive roots-oriented sound that lives in a world apart from the pure forms of the genres upon which it may draw.”

Big Wes could be a real stickler for straight talk, and we expect he never considered himself in a world apart from the country and western, rock and roll, and rhythm and blues that he loved and emulated since way back when he was still Little Wes. And where Wes has gone, so follows his Trio. Except that if you look at the list of “Americana” artists included in the Wikipedia entry, you will find young and old, great and small, household names and laborers of obscurity. It’s a big, inclusive world of sounds and styles and its apartness from the pure forms of its drawn-upon genres seems likely to be more a matter of time passed than artistic intention.

In his last interview, Big Wes was asked what kind of music his Trio played. After a thoughtful pause he replied, “Hell, them boys play all kind of shit.” Couldn't have said it any better. You’re all invited to come and hear some. We’re playing somewhere in America real soon.