Yes. Summer was extended into Wisconsin’s cool September evenings. We do what we can. Thanks to Angie for the hot coffee. Thanks to Steve and his lovely wife and all the other hardcore hangers-on.

Is it to soon to mention that BWT3 will soon be back on stage at Essen Haus? Or that we promised at least the first two verses of Monster Mash? 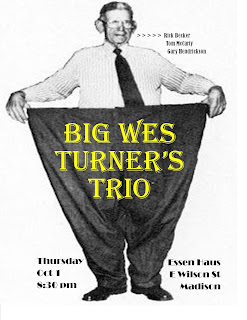 Posted by tmmcmusic at 10:30 AM No comments:


Last night was a wet one in downtown Madtown. It came down hard and heavy and Madison’s problems with storm water drainage were once again made apparent. Indoors, the only mildly bedraggled “Big Wes T's Three” made merry for a select and appreciative group of imbibers at the Essen Haus.

As is not infrequently the case, a train of not inconsiderable length (I lost count, and I’ve never seen Trainspotting—is it good?) passed through the intersection of Blair/Doty/Willy/John Nolen, and whenever that happens we drop what we’re doing and play Folsom Prison Blues. It’s become a compulsion. Other than that it was an evening of mostly Blues and good old Rock and Roll. Kudos to Rick and Gary.

Sorry you missed it? Well, you’re in luck. October has five Thursdays and “Big Wes T's Trio” will be at the Essen Haus on the first, third, and fifth of them. By the 29th we will have worked our way up to all five verses and one bridge of Monster Mash. Now that's ART.

OR, if you’re in the vicinity of New Glarus this Saturday night, come see/hear Big Wes Turner’s Trio at Tofflers. 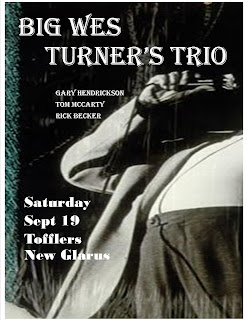 Posted by tmmcmusic at 9:43 AM No comments:


On Saturday I had the distinct pleasure of playing behind Jim Liban and Joel Paterson. The two are gigging around with a big bag full of blues standards (if you know either guy you’d expect that) but particularly with the tunes from the recent Paterson-produced recording of Liban originals: I Say What I Mean.

If you want to see a recent photo of Jim and an under-construction notice, go here. The placeholder site has been holding its place for some time now, and appropriately so. Jim, like many of us whose musical coming-of-age was in the 60s, does not eagerly embrace the brave new world of hyper-connectivity. He seems comfortable in the role of crotchety old dude. But there are no signs of age in his performance. The energy and assurance in his playing familiar to fans of Short Stuff (I was a big one), are as strong as ever. World class!

And, he’s a helluva songwriter, too. If you have any affinity for the Blues, I cannot recommend their album strongly enough. Joel’s liner notes tell the story and will help you catch up on Jim if you’ve lost track since the Short Stuff days.

Thanks as always to friend and drummer extraordinaire Mark Haines for making my job easy.
Thanks again to Garrett Wartenweiler of The Family Business for filling in for me on The Birddog Blues Band gig. I owe.

Rhode Island! With TheCash Box Kings, playing a Friday night at Chan’s ("egg rolls, jazz, and blues") in Woonsocket, then sets on Saturday and Sunday at the 18th annual Rhythm and Roots Festival—splendid sunny weather, wonderful people, great music. Thanks to Joe and Oscar for bringing me along. Thanks to bandmates Mark Haines and (the irrepressible) Billy Flynn for... being. Thanks to tour guide Terry.

A whole bunch of fine music was heard (Marcia Ball, MattAnderson, Royal Southern Brotherhood, Steve Riley and the Mamou Playboys, Keb Mo, among others) and I got to meet big-deal bassist Ed Friedland (touring with The Mavericks), got to shake hands with gracious gentleman Jim Lauderdale, got to talk with upright bass stalwart Joe Kyle Jr. (of The Waybacks)  after his set with Howell Devine.

Made it back to Chicago on Labor Day, back to Madison, and pinballed directly up North to catch up with the family vacation.
Posted by tmmcmusic at 9:12 AM No comments:

The Midwesterners Trio—leader and guitarist Richard Wiegel, Tom McCarty on bass, Mark Haines on drums—starting playing a regular Thursday night gig at The Essen Haus over five years ago. Rick Becker stepped in to replace Mark nearly two years ago, and then, almost a year later, Richard took a break to give his hearing a well-needed rest.

While Richard was on tinnitus hiatus, Tom and Rick, with Gary Hendrickson on guitar, kept the trio rolling with an eclectic mix of rock and roll, blues, rhythm & blues, country, and the obligatory polka or three.

Well, Richard has reluctantly concluded that his hearing and the boisterous confines of The Essen Haus can’t get along, not in the foreseeable future. That doesn’t rule out a future for The Midwesterners as a recording or performing unit. The Midwesterners name represents over 25 years of Richard’s musical endeavors, and that show goes on.

But the time had come to make a nominal distinction between the combo that was and the new lineup. The musical format continues and an idea to keep some phonetic and syllabic continuity with the old name prevailed, too. Thus Big Wes Turner’s Trio.

Who is Big Wes Turner? He’s kind of like Spartacus, simultaneously a regular guy and a near-mythic hero, someone whose identity any other regular guy, given the right circumstance, would rise up to claim. In short, he’s big!