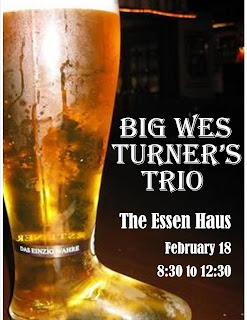 Posted by tmmcmusic at 10:24 AM No comments:


Those few, those brave, those Mug Club members who ventured out to The Essen Haus on February 4 were rewarded with Big Wes Turner’s Trio polishing up their Blues and R&B repertoire, all in preparation for their debut gig at Madison’s new home-of-the-Blues, The Knuckledown Saloon.
When February 12 rolled around, Knuckledown proprietor Chris Kalmbach generously encouraged The Trio to dip freely into their bag of multiple musical styles, but it turned out there was more than enough Blues to spread around. Thanks to the Madison Blues Society members in attendance and to all the dancers! Great to see and visit with Joni Vee! (yes, bandmate from (the original) Little Vito and the Torpedoes).

On Sunday I joined Chuck Bayuk’s Drunken Sailors for a Madison Parks Foundation fundraiser at The Harmony. Audiences have been hounding Chuck for his Jimmy Buffet covers for decades now, and nobody does ‘em better, but he also knows how to slip in lesser-known numbers from great songwriters like John Prine and Guy Clark. Kenny Koeppler on drums, Tim Haub on guitar, and Frankie Lee on harmonica rounded out the crew, and to top it off, chanteuse Shari Davis and irrepressible percussionist Pauli Ryan joined us for the last few numbers. It was fine turnout for Madison Parks. A good time and boat drinks were had by all.

It was great to run into fellow Madison bassists Dave Goplin (longtime sideman with Clyde Stubblefield) and Doug DeRosa (Honor Among Thieves and Dollar Bill and The Bucks) over the weekend. In addition to whatever other common threads in our lives, we all have Jazz necks! (It’s a bass player thing.)