(Note: Skip the blather and get directly to McMusical events by scrolling down.)

That Evil Omnipresent Disseminator of Distraction whose name starts with an F and ends with a K and contains the words “ace” and “boo” (sorry, but I would rather utter out loud the name Voldemort than spell out that which is the means by which Mark *uckerberg has sucked our wallets and our wills dry) is what it is, at least in part, because of the opportunity it provides to actual friends you actually like, and sometimes to “friends” you've "liked" and probably would actually like should you ever actually meet them, to blithely and unwittingly send you down a deep rabbit-hole of reminiscence. Know what I mean?

So it recently happened when a “friend” started a chain challenge to identify all-time favorite albums. Thus challenged, most folk will recall records whose grooves they wore out while still in high school. So did I, but not without much wringing of hands, gnashing of teeth, and chewing of cud. (mmmmm, cud!)

For instance. Someone once said, “Geography is destiny.” In other words, where you are born overwhelmingly influences who you will become and how far you will go (i.e., fall from tree). I have come to accept that there is much truth in this, and because physiognomy is the geography of our corporeal selves, that too has a strong influence on the who, what, where, when, why, and how of the selfhoods that we accrue over our lifetimes. But there’s more.

Someone else said, “we are defined by the things we own.” If so, then to the extent that we have actively acquired the things we own (more so than things we inherit or pick up off the sidewalk), we define ourselves. Or, to paraphrase Descartes, “I shop, therefore I am.” Am I right?

Rightly or wrongly, one of my early shopping experiences involved the Capitol Record Club. After an even earlier purchase of 101 Civil War Soldiers for some ridiculously low price as advertised on the back cover of a comic book, said soldiers turning out to be tiny figures stamped out of a flat sheet of brittle blue or grey plastic, then mounted on tiny plastic stands, then immediately or subsequently broken off of the stands, you might think I’d have learned more circumspection.

Or not. But either way, the Capitol Record Club advertised loudly and boldly and persistently in the Sunday paper and thus looked to be perfectly reputable. The offer was enticing. Too good to be true? So the wise consumer might have considered. Seven-or-so stereo albums for dirt cheap! Sure, that came with the agreement to buy seven-or-so more within a year at “regular” club prices, but so what? Either I calculated that it was still a good deal, or I didn’t think. Don’t know. Can’t remember.

Point is, the fruit was dangling there and it looked irresistibly sweet: a few records I REALLY wanted and some others that might be good if given a listen. So I bit. Filled in the card. Sent in the money. And the initial high was delectable. Of course, it soon turned out that the regular record club selections weren’t nearly as enticing as those listed in the special introductory offer. Eventually I fell behind in meeting the Club’s purchasing obligations, started accruing alarming penalty fees, and then receiving letters threatening me with debtors prison. Lucky for me, there was a lawyer in the family, and a sharply worded rebuke to the Club’s collection bullies, typed beneath a law firm’s letterhead, freed me from a life of indentured servitude.

My fling with the Capitol Record Club left me an armful of prized vinyl, newly acquired pieces of my destiny-defining cache, among them: Equinox, Sergio Mendes and Brazil 66; Soul Sauce, Cal Tjader; California Dreaming, Wes Montgomery; Organ Grinder Swing, Jimmy Smith; and others. I played them all. Repeatedly. The melodies and riffs settled into my consciousness.

Some of these albums have stood the test of time better than others. Individually, perhaps only the timeless Soul Sauce could merit current Top Ten status. But collectively, I’d include the lot. And I wouldn’t hesitate to give any one of them another spin. If, that is, I still had any of them; if they, like those early Beatles albums, hadn’t succumbed to moving days, house pets run amok, weather, worn needles, lending, theft, and other vicissitudes of time. But that’s another story.

Here’s that list of the nightlife entertainments for which you should be on the lookout:

Friday, March 9
The Sparks Band starts up on the stage at The Hody Bar & Grill in Middleton with a heap of 60s hits. 9 ‘til late.
(Note: A special guest appearance from a founding member of The Fabulous Flemtones is expectorated.)

Wednesday, March 14
The Sparks Band facilitates your dining and drinking pleasures during the happy hours of 6 to 9 at Me&Julio in Fitchburg.

Check back for April McMusical happenings, including the return of BigWes Turner’s Trio.
Posted by tmmcmusic at 12:20 PM No comments: 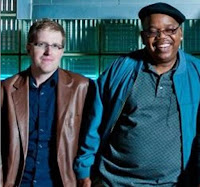 That l’il ole blues band from Chicago, The Cashbox Kings, is helmed by sovereign soul men Oscar Wilson on vocals and Joe Nosek on harmonica. They do jaunt around—east coast, west coast, sometimes Europe—and when they head north to Wisconsin you will often hear guitarist Mel Ford, drummer Mark Haines, and Big Wes bassman Tom McCarty in the mix.

Such occasions are soon upon us.

Tuesday, February 20
The Cashbox Kings help YOU help Porchlight raise funds for their worthwhile cause. Pay up and chow down on delicious dishes from a heaping helping of Madison restaurants. Yes, we missed the official Mardis Gras date, but, hey! It's never too late to laissez les bon temps rouler!

Saturday, March 3
Once again, that venerable eastside Madison watering hole, The Crystal Corner Bar, hosts The Cashbox Kings. The Kings bring that Chicago Blues thing, and the Crystal pours the libations. 9:45 ‘til late.

What about BigWes Turner’s Trio? Yes, it’s the question quivering expectantly on the moist edges of virtually every pair of music-loving lips. Work is underway on what will be the band’s first recording since Big Wes went AWOL. Demos are done and studio time is booked. Tentative title is “Walk the Talk,” and the marketing department is gamely getting ahead of the game. (see sample art below).

The band has also started lining up gigs for the first leg of their “Basement Full-o-Blues Tour,” so if you have a basement, get in on the ground floor of this exciting “down-and-dirty” musical endeavor. Make contact.

Also. Have you heard? The Big Wes Turner’s Newsletter has added an amazing new feature: POSTCARDS! Whaaaaa? Yeah, you heard right. Most well-informed Turnerites receive their sporadic action updates via email, but now they can alternately (or additionally) get a scrap of cheap cardboard with informational notes scribbled thereupon... FOR FREE!!! Just ask.
Posted by tmmcmusic at 7:55 AM No comments: