Not Just for Elevators

(Scroll down for the McMuscial calendar) 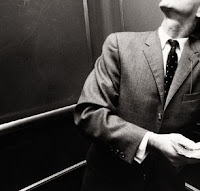 Seems like music is everywhere these days, huh? No matter where you go—shops, big-box stores, restaurants, public spaces—there’s music playing. It’s probably playing in the earbuds of those passing pedestrians and runners, too.

Seems like many people think “silence” is a problem that needs to be solved by filling every last second of it with recorded music. Thanks to the huge and ever-growing catalog of recorded music available, and the ubiquity of digital devices on which to play it, none of us need ever endure a moment’s silence again. Is that a good thing?

When music is playing constantly, be it Mozart or Muzak, the value of that music in particular, and of Music in general, is diminished. Too much a good thing is a bad thing.

If someone asks, “Shall I put on some background music?,” tell them that you’d prefer foreground music, and if they don’t have any of that, how about a little silence?

Once upon a time, being tuned into the sounds of the natural world was necessary for survival. For those of us whose survival is relatively secure, who can find a safe and comfortable retreat, what do the sounds of crickets chirping or birds singing have to offer us? Those sounds may never make the Billboard Top 100, but try turning off your device and listening. Your ears, and your soul, may thank you.

Then go out and hear some LIVE music. Suggestions follow.

Wednesday, October 3
Sometimes you just gotta stop and taste the Tequila. And where and with whom better to do just that than with Big Wes Turner’s Trio, the dinner hour version, at Me & Julio on Fish Hatchery Road. 6 to 9 pm.

Wednesday, November 14
Would it tequila-ya to come hear The SparksBand at Me & Julio on Fish Hatchery Road? Of course not. 6 to 9 pm.

Thursday, November 15
The Sparks Band heats up an Autumn evening on the shores of the Wisconsin River at The Vintage Brewery in Sauk City. Eat, drink, and rock out to 60s sounds.

Wednesday, November 21
When in Wisconsin’s Little Switzerland (aka, New Glarus), where better to party hearty to swingin’ sounds than at Toffler’s Bar& Grill. Enjoy their pre-Thanksgiving customer appreciation bash along with The Birddog Blues Band.

November 28
Hey Kids! The Cashbox Kings plays kid-friendly Blues (seriously!) before and after lunchtime at The Rotunda in The Overture Center just off State Street. Bring the family. Feed the wild Blues musicians in their unnatural habitat.

November 30
The Sparks Band returns to The Atwood (formerly Mr. Roberts) on Atwood Avenue with the most rockingest of their 60s repertoire.

Check back for future McMusical news.

Posted by tmmcmusic at 11:53 AM No comments: