Everybody knows that you can't fool Mother Nature, but people being people, we forget. For a quick refresher course on the proximity of Winter, step outside. It's brisk, Baby. But lovely.

And that's the thing about Winter. We bitch about it, but where would we BE without it? Out in the middle of some desolate Mad Max-type dystopia, that's where.

Where I come from, 'tis the season to hunker down, to bank the fires and settle in on catching up with those projects we just didn't have time for during all the warm weather hubbub. 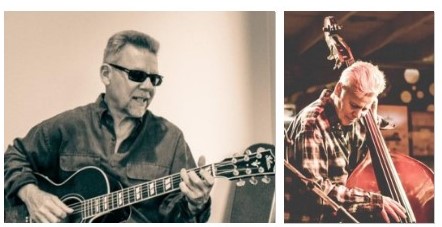 For instance: Mel Ford & the Fairlane. This little (semi-)acoustic duo has been an outlet for tunes that don't always fit the head-on harp-powered musical momentum of The Birddog Blues Band.

Guitarist and singer Mel Ford knows his Blues from having been a mainstay of "the scene" since the 70s, from touring with Chicago legend Sunnyland Smith, to jam-packing the Club de Wash and other iconic clubs with Paul Black & the Flip Kings, to the road trips and residencies of the mighty Mel Ford & Westside Andy band.

There was also Mel's very own group, Mel Ford & the Fairlanes. It's been more than a little while since that band has been out for a spin. So much so that bassist and singer Tom McCarty is the last standing of the four Fairlanes.

Mel and McCarty get back together to wrangle a repertoire of 20-Century Blues mixed with the unexpected ballad, country standard, and show tune or two, all corralled into just the right mix for clubs and private parties.

Where can I hear these guys? you ask. And when? Soon, and somewhere, we say. Your party, if you're planning one. Make contact.

Posted by tmmcmusic at 9:16 AM