It’s a more common question than you’d imagine, though not nearly so often posed as the myriad musings over the whereabouts of that monolith of musical mystique nonpareil himself, (Big) Wes Turner.

Call it hiatus or hibernation, Big Wes Turner’s Trio is scheduled not to see nightlight until April 28, appearing at that apex, that epitome, that Holy Grail of beer-drinking destinations, Tyranena Brewing in Lake Mills, Wisconsin (the Tyranena Tasting Room serves up good vibrations AND great libations). 7 to 10 pm.

But why wait that long? Call! Big Wes’s boys will get down with the sounds that move you. The price is reasonable, and therefore right. Pass the hat and don’t let the beer go flat. 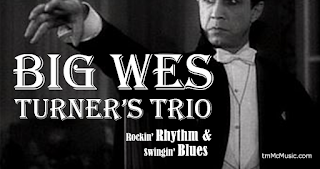 Meanwhile, check out these approaching opportunities to soak in some lively LIVE MUSIC!!!

Sunday, February 11
Neo-folkers Faux Fawn open up for KUINKA (“An electronic jolt into modern folk and Americana, waltzing along the grooved edges of dream-pop, synth-pop, and Brooklyn’s mid-aughts guitar-rock revival.” According to Vanyaland.) at The Frequency, E. Main St., just off the Capitol square in downtown Madison. Ages 18 and up. $7 advance/$10 at the door. Show starts at 8pm.

Saturday, March 3
Once again, The Cashbox Kings bring that Chicago Blues thang to venerable eastside Madison watering hole, The Crystal Corner Bar. It ain’t far, so make sure there’s where you are! 9:45 ‘til late.

Check it out and check back for more McMusical news.
Posted by tmmcmusic at 8:48 AM