They said it was impossible. “You can’t sell out a show if there’s no cover charge.” Right?

Well, theoretically, Yes. Which is to say, No, you can’t. But theory and practice have been confounded before where the legacy of mythic musical mentor Big Wes Turner is involved. 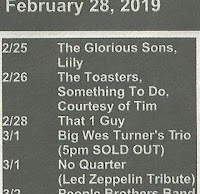 Be it known! Big Wes Turner’s Trio’s 3/1 performance is NOT sold out, because there’s nothing out of which to sell. Except cocktails and cold beer at happy-hour prices.

Perhaps the show later the same evening with some Led Zeppelin cover band actually IS sold out. Who cares? Come early ‘cause the Big Wes Turner’s Trio “Happy Friday” show is 100% cheaper and heaps higher on the happyometer. Crowding the High Noon Saloon to capacity for Friday happy hour is a goal to which we can all aspire. Hoist a few, then hit the dance floor, courtesy of the Rockin’ RHYTHM & Swingin’ BLUES sounds of Big Wes Turner’s Trio. 5 to 7 pm. (“It’s Madison time!”)

Mister McMusic Recommends
If you are ready to rock and roll on Wednesday, February 6, consider the High Noon Saloon and SIMO, guitarist/singer J.D. Simo’s band, three musicians who can power-trio in the best traditions of such. It’s been nearly two years since the trio handily passed the acid test of taste and chops by performing with high intensity at low volume for a special lunchtime Isthmus Live Sessions performance. You can find them all over Youtube, but here’s your chance to bypass the digital algorithmic overlords and strike a blow for live music resistance.


Friday, February 8
The Sparks Band, mostly masters of 60s nostalgia, rock out early at The Atwood (on Atwood Avenue) starting at 8 pm.

Thursday, February 14
Again, with The Sparks Band, plectruming playfully whilst the beer taps pour at Vintage Brewing in Sauk City. (On the shores of the mighty Wisconsin river.)  Early evening pm.

Saturday, February 16
The brewery tour continues as The Sparks Band rips riffs nostalgically at The Great Dane Hilldale on Madison’s fashionable near-west side. 8 to 11 pm.

Friday, February 22
Madison’s musical A-Team, The Maintainers (featuring Frankie Lee on harmonica and Mel Ford on guitar) play for keeps at Chief’s (right across from Buck’s Pizza on Cottage Grove Road). 6:30 to 9:30.

Saturday, February 23
The Cashbox Kings bring authentic Chi-Town Blues sounds back to that most venerable of east-side dives, The Crystal Corner Bar. 9 pm.

Sunday, February 24
Calling all Parrotheads! That other venerable east-side eatery/drinkery, The Harmony Bar & Grill, hosts a fundraiser for WORT Backporch Radio. Waste away to the Jimmy Buffett-esque sounds of Chuck Bayuk & the Drunken Sailors. (Tom on bass, but drunken responsibly).
3 to 7 pm. 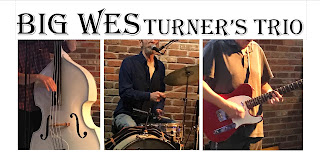 Friday, March 8
The Sparks Band energetically wallows in danceable 60s nostalgia at the Hody Bar & Grill in Middleton. 9 to 1

Sunday, March 10
The northern tour continues as The Cashbox Kings hit some joint in Stevens Point. Details will follow.

Check back for April dates and late-breaking McMusical news.

'Nother Note: BWTN postcards are redeemable for a drink wherever Big Wes Turner’s Trio is found.
Posted by tmmcmusic at 11:11 AM