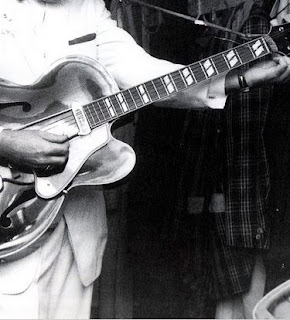 People ask us all the time, Which one of you is Big Wes Turner? Somehow, trying to explain just seems to make it that much more complicated.

For instance. Three years ago or so, Rick and I actually got a call from Rolling Stone magazine. They wanted to do a piece about Big Wes, so one of their writers called and got us on speaker phone. What follows is from a transcript of the interview. They sent us a copy but never published it.

RS: It’s hard to find people that have actually met Big Wes Turner, but you two have not only met him, you’ve played with him.

M: Well, yes. Though, actually... well, yes and no. See, we had a gig booked. We were booked to be his back-up band. Some booking agent had called us, and we had heard of Big Wes and it sounded like a good gig, you know? Decent pay and a chance to play with a “legend.” Not that well-known of a guy, but, you know, musicians knew. We’d heard of him. And the agent sent us some recordings and a list of tunes to prepare.

B: But we never got those.

M: Ya, you did. I got an overnight, but it showed up the day after the gig.

M: Ya, you did. I still got it. Somewhere. But there really wasn’t much in there. A couple old cassettes and a few pages of notes, song lists and some chord charts, all hand written, mostly in pencil, coffee mug stains. Kind of a mess and really hard to read. And I got out an old boombox but the tapes wouldn’t play, so, really, it wouldn’t have made much difference.

RS: So you did have a gig with Big Wes Turner?

M: Well, we played the gig and he was there, but he never got up on stage. He just hung out in the back of the bar while we played stuff we knew.We didn’t know he was there when we started. We apologized to the crowd for him not being there.

RS: But he was there?

B: Yea, but we didn’t know that until we took our first break.

M: Right. Thing is, the bar was busy. It was a good sized place. Up North somewhere. Do you remember that place?

B: It was up North. Tomahawk. Maybe.

B: Naw! But it was up there, and it was winter and there were snowmobilers buzzin’ around all over. The joint was definitely jumpin’. It was packed.

M: Right. And, see, they didn’t know. To them it was just a name up on the marquee. We’d say, “Big Wes had trouble getting here and we’re his trio,” but I doubt anybody heard a word. We just kept playing and they kept drinking and dancing.

RS: So, you found out he was in the building when you took a break?

M: Well, yea. After we got set up I went looking for whoever was going to be paying the band, so I start with the bartender and he says I need to talk to Dave. But Dave’s not in yet, so I check back when we take a break, but by then the first bartender is off shift and there’s two women behind the bar serving drinks as fast as they can and I finally get one of them and get a beer and then ask for Dave and she says he’s not in yet but she thinks he’ll be in later so I ask her, if he’s not in later who takes care of paying the band and she points me to this character holding up the bar down next to the wait station and says talk to him. So I make my way over to this guy and introduce myself and he’s wearing a suit, not a snowmobile suit but a suit, but no tie, and he’s portly, let’s say, and he’s drinking something brown on the rocks in a tumbler and it looks like it’s not his first, and he says he’s Nick...

B: Ya, Nicky. Nick the Greek. I talked to him. What a bullshitter.

M: Ya, anyway, this Nick says he’s with Big Wes. So I say that’s cool and what’s up with him? And this Nick says, he’s fine but his voice isn’t right so he’s sitting this one out. So I’m wondering what he means, exactly, but mostly I’m wondering whether or not we’re going to get paid, so I ask him You mean sitting it out back at home or at the hotel or what? So Nick says, no, he’s right back there, and he points to the back of room. Well, I’m a little surprised, but I figure, Hey, I’d like to meet the guy, so I say so and he nods his head toward the back of the room and gets back to his drink. Well I need to use the Gents, so I do that and then look around for Big Wes and there’s this substantial black dude on a stool against the wall with a pitcher of water on the table next to him and he’s wearing a big Stetson and a dark sharkskin jacket with an irridescent red shirt and a bolo tie, and I think,that’s got to be him. So I get over there and ask him, Are you Big Wes? And he kinda leans in because the place is really loud and I ask him again, and he looks up at me with this big smile, and I can tell he’s a cool dude, and he's shaking his head and says “You fellas soundin’ good.” So I say thanks, and his voice is really deep and raspy, and he pulls me closer so he’s right in my ear and says, “We all’d like to hear you play a little more of that Blues.” And I say, yea, we can do that, and then I say how I’m sorry he’s not feeling well, but, you know, we’d be glad to have him join us on stage, you know, maybe just play a few numbers, but he just smiles and shakes his head and...

B: Wes was the other guy.

M: What are you talking about?

B: I talked to both those guys after you did and Wes was the other guy.

M: What are you talking about?

B: The other guy on the other side of the table. They were talking and both drinking water out of the same pitcher. The skinny dude in the denim jacket.

B: He wasn’t little. He stood up and he was about a foot taller than me. Tall and wiry. That was Wes. Had a big Longhorn belt buckle and snakeskin boots. I don’t know what the other guy’s name was. Johnny, or Tiny, or something.

M: Wait a minute. This other guy told you he has Big Wes?

B: Yea. I was standing there waiting to get around and just for the hell of it I asked the guy if he knew who Big Wes Turner was, and he kind of looks at me sideways and says, You’re lookin at him, and I said, Seriously? And he said, "When y'all get back up there why donya play us some mo them Country and Western ballads, or maybe a Cajun two-step." That’s what it sounded like, anyway. He had a voice like gravel and a hell of a drawl. I told him sure we would and then got pushed along by the crowd.

RS: Excuse me, but it sounds like either of these guys could have been the real Big Wes Turner, or could also have been mistaken for him. Did either of you talk to either of them after that?

B: Naw. I didn’t see them around when we took our last break.

M: Me neither. And I was looking for them. I found Nick at the bar. He hadn’t moved. I asked him if Big Wes was still around and he shook his head. He was sucking on ice cubes and lifting his empty glass up at the bartender. Then he reached in his coat and pulled out a fat envelope and pushed it against my chest. He said, “Said he’s sorry he couldn’t hang around. Said keep up the good work and he’ll be in touch.” I didn’t know what to think. I wanted to count the money, but Nick hadn’t said Count it. I wanted to tell him Big Wes didn’t have my number but apparently Nick was a mind reader. “Don’t worry. I got your number. You should get back up there.” He had a fresh drink in his hand and he was waving it toward the stage and obviously more interested in sipping than conversation. So I said Thanks and got back for the last set.

B: Nick. What a bullshitter.

RS: So Rick, you talked to Nick?

RS: Did you ask him what Big Wes looked like?

B: Naw. Why would I? I knew what he looked like. I was talking to him.

M: You were talking to his pal, or his bodyguard, or road manager, or somebody.

M: Wasn't. Big Wes was that wide-body brother in the Stetson.

B: Naw. The string-bean with the big buckle.


Well, there wasn’t much more to the interview than that. The guy said he would check back with us but we never heard from him again. If he had called back we could have told him about the next gig we had with Big Wes, and the ones after that, and how it happened that Big Wes bestowed upon us our name, but... Well, we’ll get to that when we get to it.
Posted by tmmcmusic at 2:44 PM